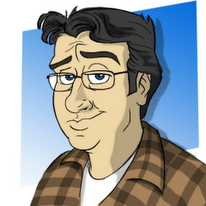 Joshua Taback is a veteran Director, Animator, and Character Layout Artist. He worked for many years on The Simpsons television show, as well as Family Guy. Josh was also a Director on Randy Cunningham: 9th Grade Ninja for Disney. Currently he is a Supervising Director for Dreamworks TV on Spirit: Riding Free. He began seriously drawing at the age of 13 taking classes at the Joe Kubert School of Cartooning and Graphic Art and went on to receive a BFA in Animation/Film from University of the Arts.  His thesis film "It's a Wanderful Life" helped him win the Academy of Television Arts & Sciences internship and 2nd place in the student Emmy awards.


Josh has supervised and trained many artists over the years, while striving to improve his own work. That, in combination with the extensive revisions usually needed in the animation field, makes him the perfect mentor to those looking for drawing instruction.

No Lessons are for purchase at this time.

Currently Josh is a Director at Dreamworks TV Animation. He has also been a Director on Randy Cunningham: 9th Grade Ninja as well as a long time veteran on The Simpsons. Originally from New Jersey He now is located in the Los Angeles area.

Q & A Interview
My Experience

If you are an experienced artist, trouble spots can creep in and can get the best of us. Do you have a drawing you're working on that just needs some help in a few spots?
"If I could just get the hands right."
"The angle on the head looks odd."
"It looked great rough, but when I cleaned it up it lost something."
"How can I make this pose more dynamic?"
And the king of all questions.... "Why doesn't this look right?"
I've been there, and I can help you get out of there.